Now it is time for the Tuesday night teams to show their stuff! Last time we showed how the Vexmen teams conquered Skyrise through the little things that can make a difference. This is a continuation of that excellent work but with our Tuesday night teams.

To make it easier for the audience to see the insides of the robot, a phone connected to the projector showed the audience members what was going on a lot better. You can see it in the background of a few shots.

[su_dropcap size=”4″]80B[/su_dropcap] Team 80B Beast is a first year team who came to the conclusion that on a double reverse four bar, the upper bar does not necessarily need so be a four bar linkage at all! The upper bar can be geared to the lower half and still keep a linear motion on the front face. However, the upper arm will not stay perpendicular to the floor. They also ripped apart the claw to extend the arms. Rubber bands helped build the skyrise pieces. 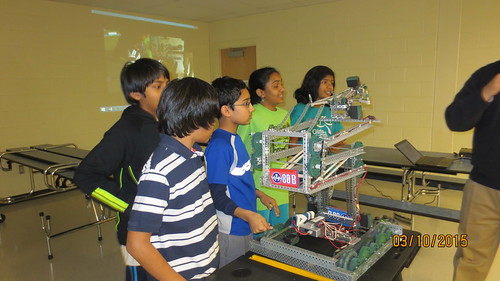 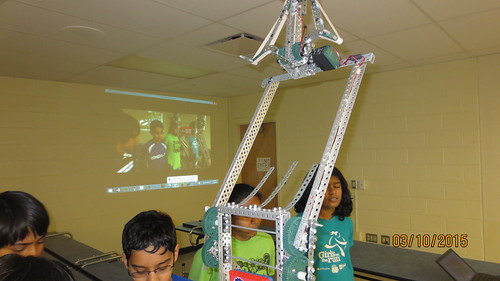 [su_dropcap size=”4″]80W[/su_dropcap] Team 80W Warpath is a holonomic drive with a linear lift system. They were a force to be reckoned with and are heading to Omaha for US Open in April. Having won PA States Middle School and going undefeated, they showed their driving skill and prowess in autonomous. 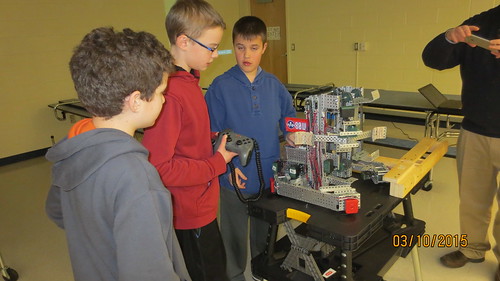 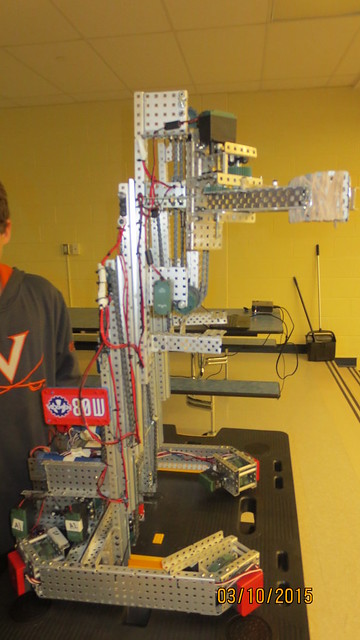 They also took advantage of the rules and made a jig for ensuring perfect alignment on the field. 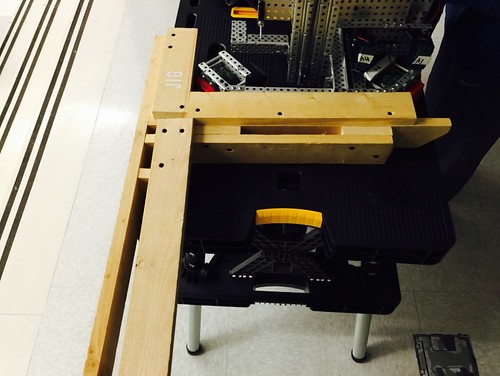 [su_dropcap size=”4″]80C[/su_dropcap] Team 80C Colossus kept their top lift separated from the bottom one. The eight bar up top was steady enough for the lower skyrise elements and the low posts and then they could get really tall with the bottom lift. 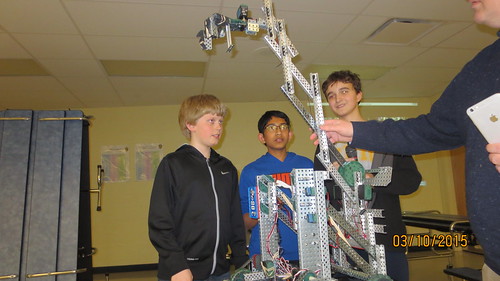 They made a wheelie bar not only for tipping but to ensure they did not hit the floor mats on the way down. Thank you for not wrecking the field tiles. 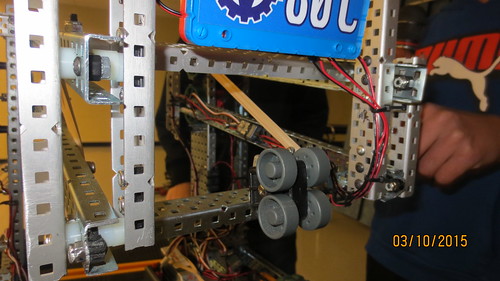 Lastly, they made the best use of the license plate holders. They attached shaft collars that had lost their set screws as the easy twist off knobs. 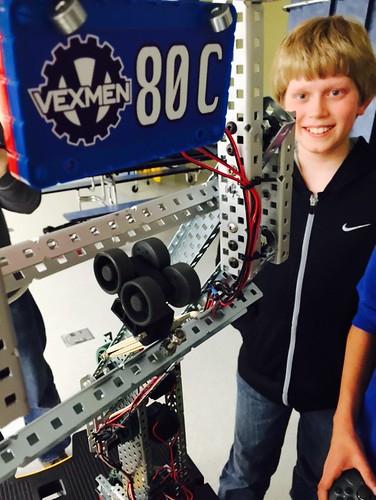 [su_dropcap size=”4″]80A[/su_dropcap] Team 80A Apocolypse was another first year team with a double revers four bar design that had a cantilevered lift motor grouping on the lower lift. 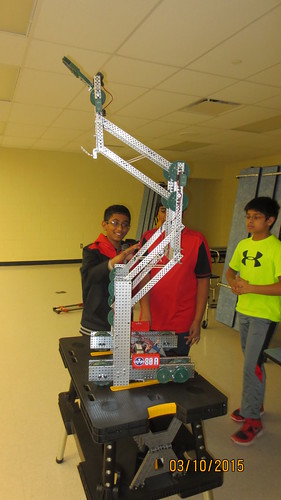 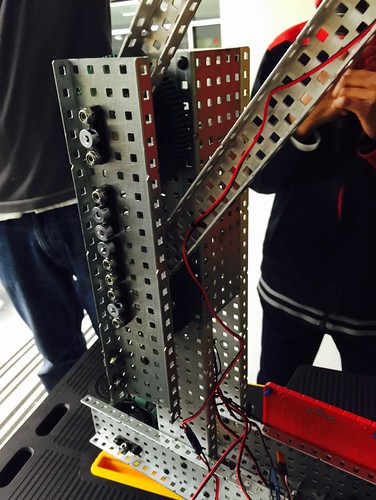 [su_dropcap size=”4″]80S[/su_dropcap] Team 80S Storm was a first year team as well. They implemented a linear lift and used cable wrap to keep those pesky cords in line. 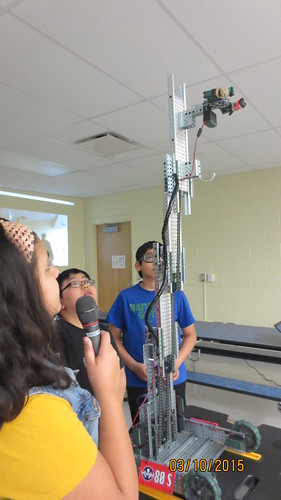 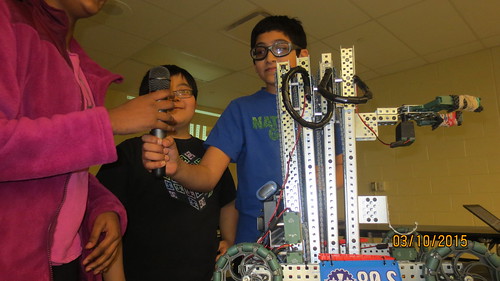 Their means of solving the license plate holder conundrum was to zip tie the plates and flip them to the right color for the match. Sweet! 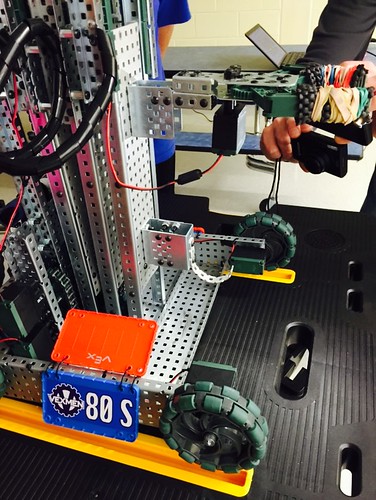 [su_dropcap size=”4″]80T[/su_dropcap] Team 80T Sabretooth added some bracing to support the cubes as they were lifted. Those pieces sticking up are there on purpose to help hold a second cube. The eight bar linkage raised high enough to score fairly well. 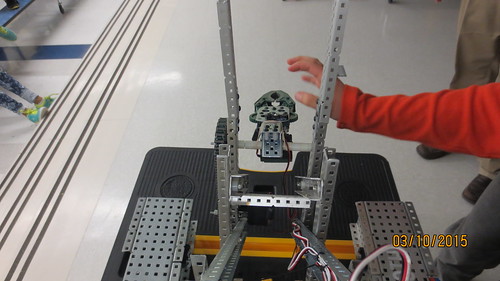 The base was reinforced to help push cubes on to the starting tiles for some easy points. 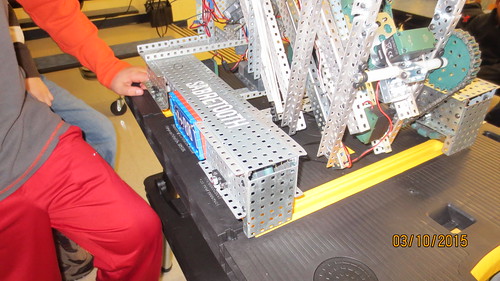 [su_dropcap size=”4″]80H[/su_dropcap] Team 80H Northstar had some trouble getting themselves off the ground this season. However, they stuck with it and showed up for the final event where they were selected a part of the tournament champion alliance. They then went to PA State Championships, did not so well in qualifying but were again picked as part of the first team alliance to help win PA State Championships. The went to two events, and helped earn two tournament championships. Not bad for being behind most of the year. 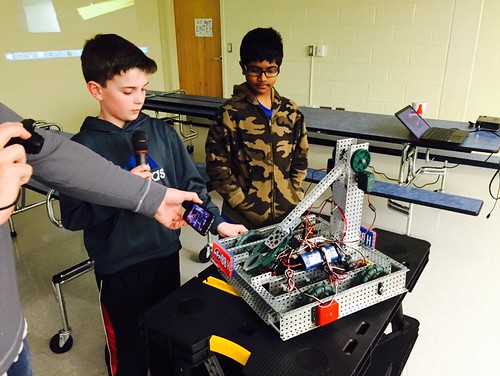