This will be part one of a few reveals of cool elements the Vexmen teams came up with on their robots this year. It’s these little things that make a huge difference in the performance of the robot and shows the creativity and ingenuity of the kids. In this meeting we shared the cool elements of our robots. This is the first of two sets as we go through our amazing robots.

[su_dropcap size=”4″]80N[/su_dropcap] First up is team 80N Nightcrawler used the new high strength shafts to minimize the slop on their double reverse four bar lift. The bigger shafts give a firmer grip and less movement on the critical joint of the lower arm. They won the excellence award at PA States middle school division. 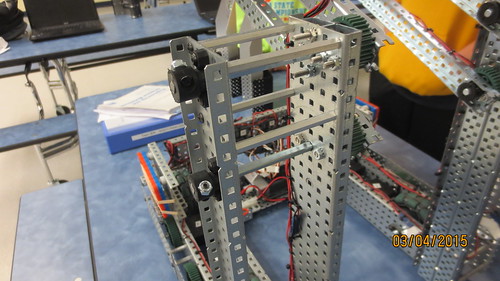 [su_dropcap size=”4″]80P[/su_dropcap] Next is team 80P Pyro who had a double passive cube grabber. The polycarbonate would hook under two cubes at once and even hold a third cube in the stack at times. The fewer times up and down makes for efficient scoring. These guys were fast and helped win PA States Middle School division. 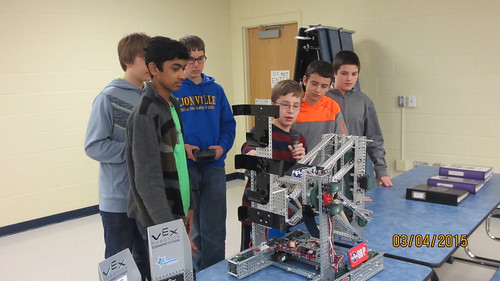 [su_dropcap size=”4″]81J[/su_dropcap] Team 81J – Juggernaut -showed their wiring prowess and autonomous selector. The autonomous selector uses a 1×25 piece to click the shaft into place choosing nine different selections on the potentiometer. Notice the curled wires? They help keep the wires from getting tangled and clumped into masses of zip tied wires. 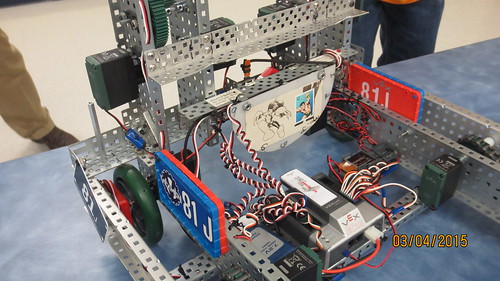 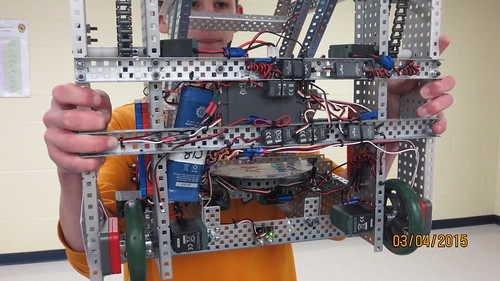 [su_dropcap size=”4″]81H[/su_dropcap] Team 81H Havok had some fun labeling their robot calling it Richard Nixon. Apparently we’ve been teaching too much STEM subjects and not enough history because none of them got the joke that they won’t have Richard Nixon to push around any more! They were an H-Drive robot with four forward facing wheels on chain drives with two more motors on the cross wheels 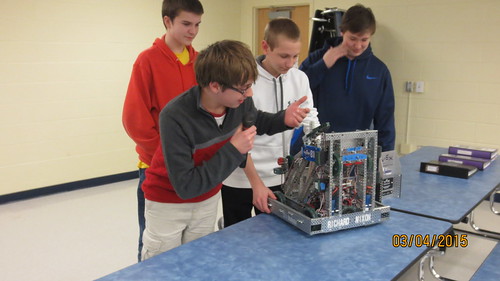 81H’s autonomous selector was a set of potentiometers with clear labels showing what program is selected. More than necessary but very clear what they wanted it to do. 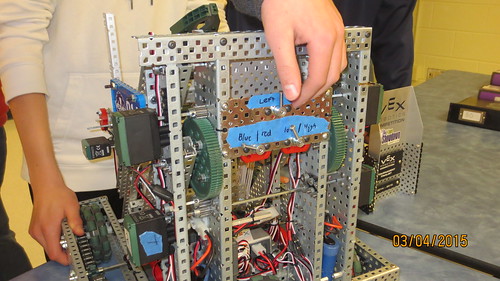 [su_dropcap size=”4″]80R[/su_dropcap] Team 80R Rogue was a first year team who used rubber bands to keep the cubes from bouncing on their claw. They had a double reverse four bar linkage that could score on the high posts. The lifter had a serious series of high strength gears to synchronize the top and bottom four bars. 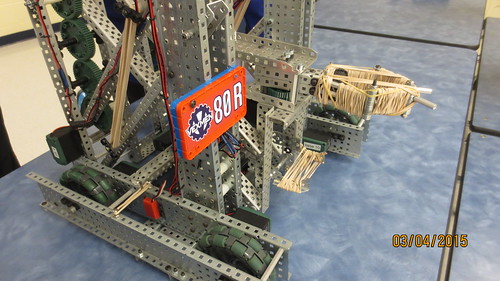 [su_dropcap size=”4″]80K[/su_dropcap] This was team 80K with one of the absolute coolest and most innovative robots I have seen – ever. They had a needle robot that unfolds. But to hold it in place, they came up with a locking mechanism like a key. Dremel a notch for the shaft to rest and point the end to get it to slide together. 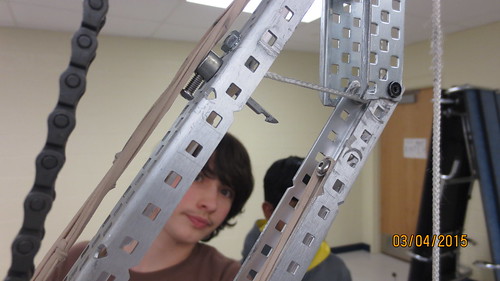 But the other really cool thing is the robot cortex and battery moves up and down the needle versus staying on the bottom like most robots. It took a bunch of time for the team to get the lift to not drift by twisting around the needle and it worked well in the later events. 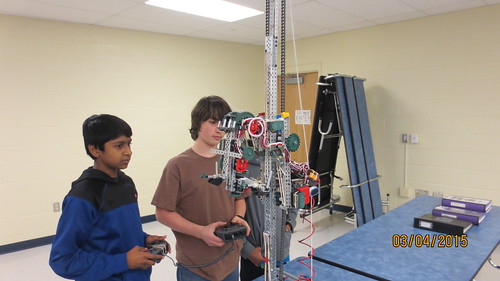 Notice the red and yellow tape on the robot. Instead of saying go right or left, the colored tape allowed them to communicate where they wanted to go more naturally in the robots frame of reference. 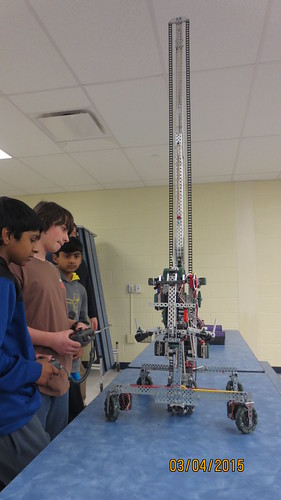 [su_dropcap size=”4″]80X[/su_dropcap] Team 80X – X-23 – built an eight bar linkage where they tried to use just one set for most of the season. They added the second set like most other robots later on. The minimalism keeps the robot light and lift easy. 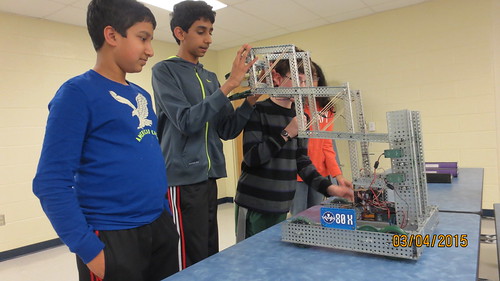 [su_dropcap size=”4″]80V[/su_dropcap] Team 80V Vulcan was another first year team. They had an eight bar linkage powered by four motors on a 1:5 gear ratio. But the best part is the piece holding the motors is easily removed for repair. Also notice the way the c-channel is held on a 36 tooth gear to not only grasp the high strength shaft but hold it to the c-channel. There is not a lock bar for the high strength channel so this comes as close as we get. 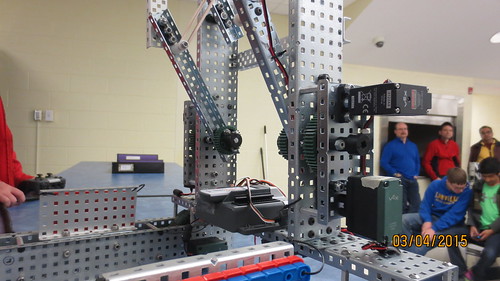 [su_dropcap size=”4″]81M[/su_dropcap] Team 81M Mystique came up with a few innovations to share this year. With the battery extender wires, battery placement options have increased. This battery holding clasp makes swapping a battery really simple. And if possible try and build handles for your robot too. It helps when carrying it long distances between the pits and the field. 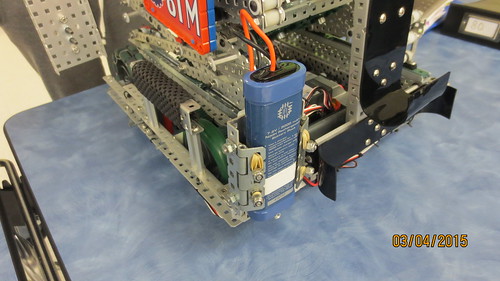 The second innovation to mention right now is on the skyrise grabber claw. The claw would flex at the various joints so this needed to be minimized. The tightest tolerance holes are the metal bar locks. So by using the lock bars and putting shafts through them, the claw no longer flexed and allowed 81M to build a 5 high Skyrise tower in the programming skills. 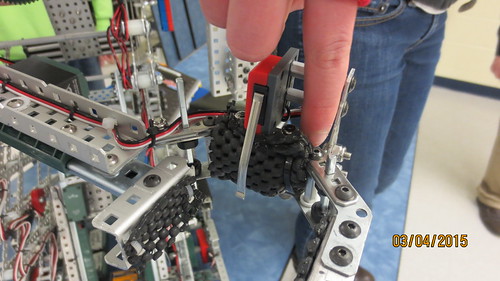 [su_dropcap size=”4″]80Y[/su_dropcap] Team 80Y Cypher has a unique design. They had a double revers four bar last year and super sized it for Skyrise. They have an x-base holonomic out of steel and wrap their lift around the front. The skyrise builder arm is unique and will be revealed later on its own. 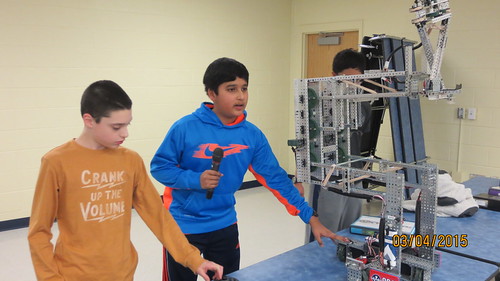